What are the best weapons for Faruzan the new Anemo character in Genshin Impact?

Faruzan has recently been released alongside the Wanderer in Genshin Impact. And she gives out the researcher vibe with her geometrical animation every time she releases a Polyhedron.

This character can amass 80 Energy in order to cast her Elemental Burst and needs a high ATK base to support her allies. To maximize the power of this Anemo bow user, you can take a look at Faruzan best weapons below. The Sacrificial Bow is a good weapon for Faruzan.

In the game, Sacrificial weapons are ideal for Support characters. Faruzan is one of these units and the Sacrificial Bow is an important weapon for her build.

Another factor that makes it a great weapon for Faruzan as it has high Base ATK and Energy Recharge. Favonius weapons can make any Genshin Impact character become a Battery. While Favonius Warbow has a low Base ATK, it can still help characters like Scaramouche, Xiao activates their Bursts more.

Faruzan also benefits from this Energy Recharge amount provided by Favonius Warbow, especially when you want to restore her Energy demand. 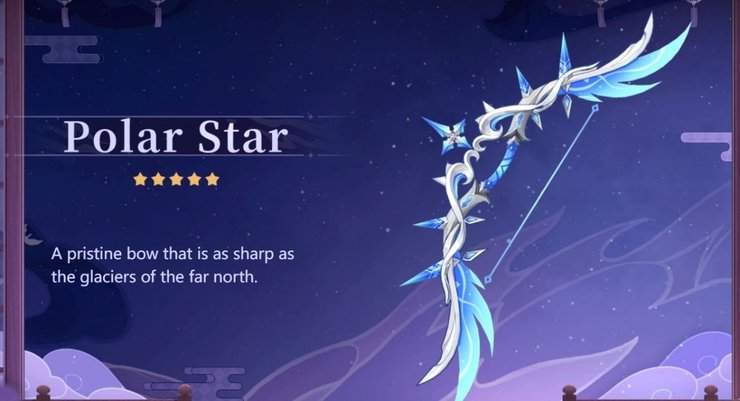 Polar Star being the top 5-star weapon for Faruzan.

One of the best Faruzan weapons is Polar Star, although Amos’ Bow and Thundering Pulse also have 608 Base ATK. In fact, most 5-star weapons play the role of stats boosters for Faruzan to enhance her ascension passive.

With Polar Star, you can activate the passive of the weapon while you deal Charged Attack, Burst, and Skill damage.

Venti also uses this weapon for a viable kit.

Currently, Skyward Harp has the most massive Base ATK compared to other weapons of the same kind. Since Faruzan needs high Base ATK, this weapon will be the second best choice.

Besides, this Bow can boost her stats by a 20% CRIT DMG and 22% CRIT Rate. For the unknown, this is also the best weapon for Venti.

1. Elegy for the End

Elegy for the End.

When the player has 4 Sigils of Remembrance, all of them will be consumed and all nearby characters will get the Millennial Movement Farewell Song effect for 12s. Millennial Movement Farewell Song boosts Elemental Mastery by 100 and increases ATK by 20%. Once this effect is triggered, players won’t gain Sigils of Remembrance for 20s.

Elegy for the End will be atop among the best Faruzan weapons once you unlock her 1st Constellation. You can seamlessly gain 4 stacks of Elegy by casting her skill, shooting her both Charged Arrows and then her ultimate.

This weapon can give your whole team 20% ATK and 100 Elemental Mastery.