PUBG Mobile AC VAL is the new gun in update 1.7 that uses 9mm ammo. This new weapon has a lot of new features. Here are things you need to know about it.

PUBG Mobile 1.7 will introduce a new assault rifle - PUBG Mobile AC VAL that is the first AR to use 9mm ammo. This new weapon has a lot of new features. Here are things you need to know about this new AR in BGMI and PUBG Mobile 1.7.

PUBG Mobile AC VAL is a special automatic assault rifle. Its real-life version originates from Russia. It has a pre-equipped suppressor that is similar to VSS. Therefore, AC VAL will be one of the most silent guns in PUBG Mobile and BGMI 1.7 when it comes to the game.

This new assault rifle uses 9x39mm ammo, the red bullets that you also use for VSS, UZI, Vector, and MPK5. It's also pre-equipped with a PSO-1 scope like VSS but it can be replaced. This scope has 4x magnification. So, you can use this AR for spraying bullets in mid-range combat. Keep in mind that AC VAL is not an SMG or Semi-sniper like VSS. AC VAL is an assault rifle that should have high base damage. If you have played PUBG Mobile with this gun, you will feel that it's pretty weak. In fact, it's the weakest AR in this game. For example, headshot damage to an opponent with a level-1 helmet is 69HP/hit. If the enemy wears a level-2 helmet, it causes only 56HP/hit.

Its base damage only reaches 40 HP/hit which is lower than all previous ARs in PUBG Mobile and BGMI. Before AC VAL, AUG, QBZ, and M416 have the lowest base damage of 41. It's because this gun uses 9mm ammo and has a small size. Besides the lowest base damage, AC VAL also has the highest bullet drop in the AR category in PUBG Mobile and BGMI. Therefore, this new AR is really bad in long-range combat. Its initial bullet velocity reaches around 290m/s. The bullet flies pretty slowly, making it hard for players to adjust the crosshair and control the bullet lines.

In long-range spray, you should use M416 which is more accurate than PUBG Mobile AC VAL because its bullet line is straighter. If you want to master this new gun when it's released in the upcoming update, you should practice bullet spray with VSS at different ranges of the fight now. AC VAL can hold 20 bullets per load that can be extended to 30 bullets per load with an extended mag. Its reload duration is not very long. It takes you around 2.6 seconds to reload a full mag. It's acceptable although it's still longer than that of M416 and AUG in PUBG Mobile. 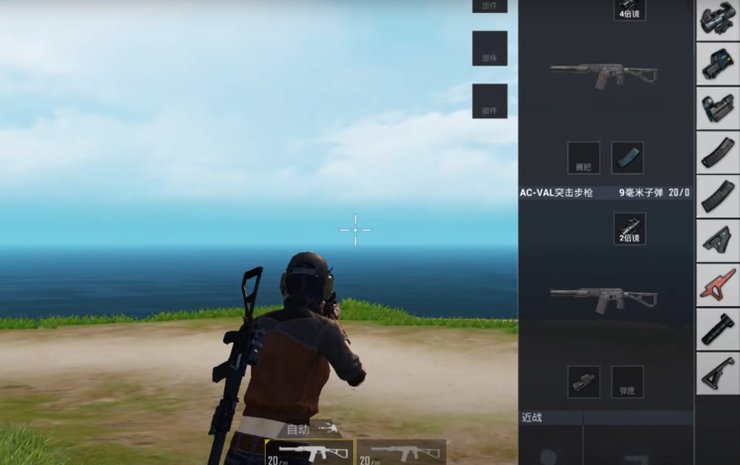 This gun has three attachment slots.

This new AR has only three attachment slots for a magazine, a scope, and a foregrip in PUBG Mobile. You should use a vertical grip or angled grip to make it more stable when you spray bullets. The third best option for AC VAL is the half-grip. It supports from the holo and red dot to 4x scope. This AR does not support 6x and 8x scopes.

>>> Also Read: Tips & Tricks To Use Laser Sight In BGMI For Accuracy