UMP gun in Free Fire - Free Fire is a battle royale title on mobile developed and released by Garena in 2017. It is now one of the most popular games in the world with hundreds of millions of players. Free Fire features a large collection of weapons of all kinds

Just like most battle royale titles, Free Fire has a large collection of weapons of all kinds. Each weapon has its own stats that make them useful for certain situations in the game.

In this article, we are going to focus on the UMP gun in Free Fire, a very common SMG.

About the UMP gun in Free Fire

Here are the official stats of the UMP gun in Free Fire: 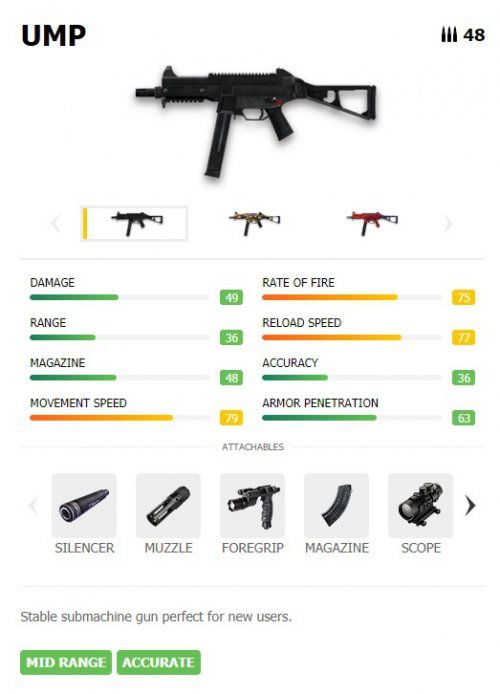 The official stats of the UMP gun in Free Fire

The UMP has 49 Damage, quite average among SMGs in Free Fire. The Rate of Fire of the UMP is 75, which is relatively fast, as expected from an SMG. The UMP has a large magazine of 48 rounds. The weapon can be attached with all kinds of attachments such as Silencer, Muzzle, Foregrip, Magazine, and Scope.

The strong point of the UMP is that it has 63 Armor Penetration, a stat that only a few weapons in Free Fire have.

You can find the UMP gun spawn randomly a lot on maps in Battle Royale. The weapon is also available in Clash Squad mode.

How strong is the UMP in Free Fire

Looking at the overall stats of the UMP, we can see that it quite resembles the MP5 gun in Free Fire. But thanks to the Armor Penetration, the damage output of the UMP on the enemy's body is higher. It does have a little shorter effective range and accuracy than the MP5, but it is still a very stable weapon, especially when you have attachments. The UMP vs the MP5 in comparison in Free Fire

With such great stability and damage output, the UMP is a great pick-up for new players and old players.

Compared to the MP40, the UMP might be a little bit underwhelming in terms of the ability to burst in close range. However, the weapon offers more stability in mid-range combats, more ammo, and fast reload speed.

While the UMP has good armor penetration, you still should try to aim for the head of the enemy to deal more damage. All you have to do is drag your Fire button up while spraying to hit headshots.

Best skins for the UMP in Free Fire

The UMP is one of the oldest weapons in Free Fire. That means it has a lot of good skins released for you to choose from. With the right skin, the weapon will be much more powerful. Here is the list of the best skins for the UMP in Free Fire.

The UMP Wilderness Hunter skin greatly improves the Armor Penetration of the weapon, pretty much making the enemy's armor useless. The Rate of Fire gets a slight buff while the Reload is reduced. The damage boost this skin gives the UMP cannot be ignored while the downsize is barely matter. The UMP Wilderness Hunter skin is definitely one of the best UMP skin out there. The UMP Cataclysm skin looks quite the same as the UMP Wilderness Hunter skin and it is also just as strong. The skin gives the weapon 2 Damage buffs, 1 Range buff while reducing the Magainze. It pretty much boosts the damage of the weapon and its stability in mid-range combats. The Magazine debuff is neglectable because the UMP already has a really big magazine.

The UMP Art of War skin has a quite elegant look but its power cannot be underestimated. The skin actually about increases the damage output of the UMP. It gives the weapon 2 Rate of Fire buffs, one damage buffs while reducing the Accuracy.

The Accuracy debuff might be a little problematic when the target is far away. Otherwise, you would barely notice the difference except for the incredible damage output. The UMP Art of War skin in Free Fire