Beidou is an Electro character coming from Liyue. She is the leader of The Crux. Check out how to build Genshin Impact Beidou here.

Genshin Impact Beidou is not a new character but she is a powerful supporter that you should build. But before building this character, you should understand her abilities and talents. Check out the profile of this character as well as how to build her here.

Beidou is an Electro character coming from Liyue. She is the leader of The Crux who owns the ship to Inazuma. Therefore, you need to meet her if you want to travel to Inazuma. This character is also known as the Uncrowned Lord of the Ocean or Queen of the Crux Fleet. Beidou is an Electro character coming from Liyue.

You can obtain this character from Paimon's Bargains or Wish Banners. Beidou uses a big claymore to fight off enemies. She has three skills and three passive talents that you should know how to use.

Hoe To Use Beidou's Skills

Beidou has been introduced for a long time and most of Genshin Impact players have got familiar with her normal attacks, elemental skills, and bursts. But not many players know how to use them effectively. Here are steps and tips to use Beidou's skills to take down enemies quickly and effectively. Beidou is also known as the Uncrowned Lord of the Ocean or Queen of the Crux Fleet. Timing is the key to success in beating enemies with her elemental skill.

Besides, you can also use this elemental slash after a Cryo elemental burst causes the frost air around enemies. Then, her Electro element can cause the highest elemental DMG through many elemental reactions.

Use Elemental Burst to Defeat Mobs Use the elemental burst of Beidou to beat mobs and create a shield around her.

The Electro DMG of normal attacks, charged attacks, and elemental slashes will increase significantly. Moreover, during the phase of her elemental burst, she will continuously cause Electro DMG even when you switch to another character in the team.

Switch In When Exploring The Water

Beidou is a good choice for water exploring water thanks to her passive talent. She consumes less stamina than other characters in Teyvat when swimming by 20%. It's because she is a captain of a big ship and Beidou spends most of her life at sea. Therefore, she swims better than anyone else in this game. 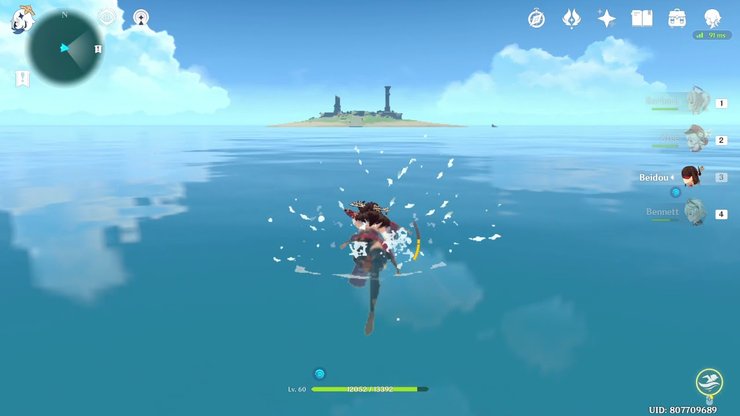 Beidou can swim better than anyone else in Genshin Impact.

From her talents and skills, Beidou can be built as the main DPS or Sub-DPS character in your party. Check out the best weapons, artifacts, and teammates for Beidou's build here.

The best weapon for Genshin Impact Beidou is Wolf's Gravestone blade. This is the most recommended weapon for her Electro DPS build. This weapon helped increase her ATK damage by 18% and Physical DMG by 25%. Alternatively, you can use a Rainslasher or The Bell for her DPS build. If you want to build her sub-DPS role, use the Skyward Pride blade for her. It will increase all DMG of Beidou by 8%. Sacrificial Greatsword and Favonius Greatsword are two other recommendations for this build.

The best artifact recommendation for Beidou includes 2 pieces of Thundering Fury set and 2 pieces of Gladiator's Finale set. This set helps increase the Electro DMG Bonus by 15% and ATK by 18%. The last artifact can be a piece of the Bloodstained Chivalry set. Her best artifacts are 2 pieces of Thundering Fury set and 2 pieces of Gladiator's Finale set.

Besides, you need 2 pieces of the Thundering Fury set and 2 pieces of Noblesse Oblige set for her Sub-DPS build. This set increases the Electro DMG by 15% and Elemental Burst DMG by 20%. You add a piece of Gladiator's Finale set for the last slot of artifact build.

Beidou is an Electro tanker. Her element can combine with Cryo, Hydro, and Pyro elements to cause powerful elemental reactions. Here are some recommended teammates to build Beidou's team. Her element can combine with Cryo, Hydro, and Pyro elements.

If you don't have these characters, you can select other characters with those elements to team up with this Electro fighter.

All Ascension Materials For Beidou

To increase Beidou's level, you need some ascension materials here.

All Artifacts, Weapon, Team, and Showcase For Beidou | Genshin Impact

Those are things you need to know about Genshin Impact Beidou. Try to obtain this Electro tanker and build her as a powerful fighter in your team.