Heracross is a surprisingly decent Pokémon that you can use in Pokémon Go. Here's everything you need to know about its location, how to defeat it, and more!

Since the burst of Gen 2 Pokemon in Pokémon Go, they have been maintaining their status as one of the biggest hits among the community. Among the 80 released Pokemons, Heracross belongs to the rare category that players highly sought after.

In this article, we will all have a more thorough look at Pokemon Go Heracross location, best movesets, encounters, and more. Here's everything you need to know about one of the rarest Pokémon in Pokemon Go.

Heracross normally appears in the wild of South Florida, Texas, and Latin America.

In order to catch one of them, you have to actually be in South America. As Heracross is s regional Pokemon, players can find it in the gyms, parks, gardens, and forests of southern Florida.

As you will only come across them randomly in the above locations, be extra careful in order not to miss any Heracross. Heracross Pokemon Go does not have too many attacks that players have to worry about. Therefore, picking the best charged moves and fast moves is quite simple.

Regarding fast moves, using counter over struggle bug is highly recommended. Heracross will gain more energy from Counter each time you use an attack. It is also quicker in general, which means this ‘mon can deal heavy damage relatively speedy.

Moreover, the best movesets for Heracross are Megahorn and Counter when attacking other Pokémon in Gyms. This combination gets the highest total DPS (14.03 DPS) and is also most ideal for PvP battles.

Check out the table below which analyzes Heracross movesets in each category.

Counter loads a hard punch and can make Heracross a formidable Pokémon to use with either Close Combat or Megahorn. Although Earthquake is equally viable, it is not the specialty of Heracross.

One of the raid bosses that are not globally available in Pokemon GO is Heracross.

Our Heracross raid counters will help you defeat the Pokemon with the best counters. Although the latest raid for this Pokemon has finished earlier in August, learning about Heracross counters will definitely assist you big time in the future.

As Heracross is a Bug and Fighting-type Pokémon, its weaknesses are firstly Flying moves, then Fire, Psychic, and Fairy. You can see all the vulnerabilities of other Pokemon in the Pokémon Go weakness chart.

In the three-star raids against Heracross, having Flying-type Pokemon in your lineup will be super effective. Those Pokémon like Ho-oh, Rayquaza, or Yveltar will come in handy as they learn Flying-related attacks. The 5 strongest Pokémon you can use to beat Heracross are Moltres, Yveltal, Honchkrow, Braviary, and Rayquaza.

The top 10 best Heracross encounters are:

Without a doubt, Flying Pokemons and Flying-type moves make up for the large part here. In case you do not own the mentioned legacy move, a same-type move from the same Pokemon can be an alternative.

How to Beat Heracross in Pokemon Go

Although it is ideal to power your counters up as much as viable, making up that many strong Shadow Pokémon with your moves unlocked can be a hassle even to the most seasoned players.

Therefore, here are the ten bonus non-Mega and non-Shadow counters that will help defeat Heracross seamlessly.

As much as the research on Heracross evolution goes, it has no evolution.

On another hand, this Pokémon charges straightforward at its enemy, slips under the enemy’s grasp, then it will scoop up and hurls its horns at the opponent.

Pokemon GO Heracross has a max CP of 3506, 179 defense, 190 stamina, and 234 attack. It was found originally in the Johto region (Gen 2). Heracross is boosted by Cloudy and Rain weather. 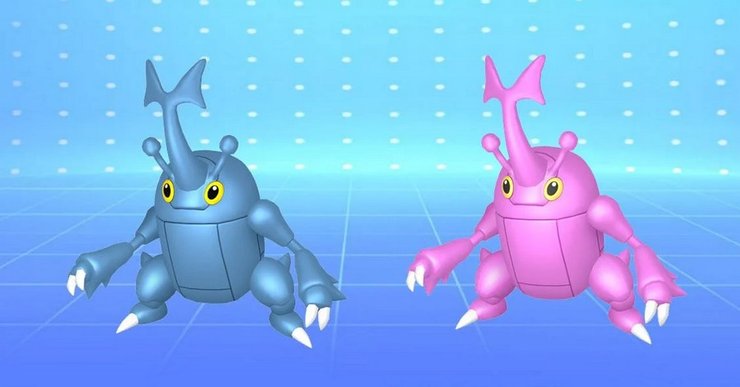 Its original and shiny forms have different colors.

Can Heracross be Shiny in Pokemon Go?

The good news is Heracross can indeed be caught as a Shiny. Its Shiny form is equally rare as every other Pokemon in the same type of appearance.

A Shiny Heracross has a candy pink color as opposed to its original midnight blue hue. Although the chances are small, going out and about to see if you can find one is still worth it.

The best way to find Shiny Heracross in Pokemon Go is to play your game with friends. Apart from playing 3-star raid battles with two to three players in a team, bringing an Ice or Fire-type Pokemon can save you lots of time in battle.

>>> Related post: Mega Energy Pokemon Go: How To Get It And How Mega Evolutions Work