Check out this article to see the most popular creepypastas in Minecraft and how to meet them in the game.

Minecraft creepypastas are horror-related legends that have been shared around the community. These stories often involve gruesome tales of murder, suicide, oddly events that happen in Minecraft. There have been quite a lot of Minecraft creepypasta stories circulating the internet. While most (if not all) of them are made-up stories to scare other players, these stories are also quite interesting.

In this article, we will show a list of the top 5 most popular Minecraft Creepypasta stories.

Herobrine is no doubt the most iconic creepypasta character in the entire Minecraft community. According to his original copypasta, Herobrine creates random constructions, such as sand pyramids in oceans and long 2×2 tunnels. When the story was first posted, everyone thought it was really and scared the hell out of it. This mystery character is only available in the mods of Minecraft PE.

In 2014, a YouTuber user named AlongCameJosh created a video where he caught Herobrine on the video. The video was created for entertainment purposes only but it has gone viral and spice up the whole Herobrin creepypasta among Minecraft players once again. The Herobrine creepypasta seed was found but there is no Herobrine in that seed.

Entity 303 is a Minecraft creepypasta character created by user thespeed179 in December 2013. He posted a documentary video about his encounter with a mysterious player called Entity 303. He has confirmed multiple times that Entity 303 is not a real thing but it doesn't stop people from spreading the story.

According to the creepypasta, Entity 303 is a group of Mojang former employees. They were fired by Notch, the creator of Minecraft, so they set out a goal to destroy Minecraft. Entity 303 is a group of hackers who want to destroy Minecraft.

On the journey of looking for the legendary Herobrine character, one Minecraft player has found another thing that is even far more spooky, Null. AlongCameJosh, a popular Minecraft content creator, released a video where he saw Null and the video went viral. He claimed to see a player who act like Herobrine but all in black with no detail. 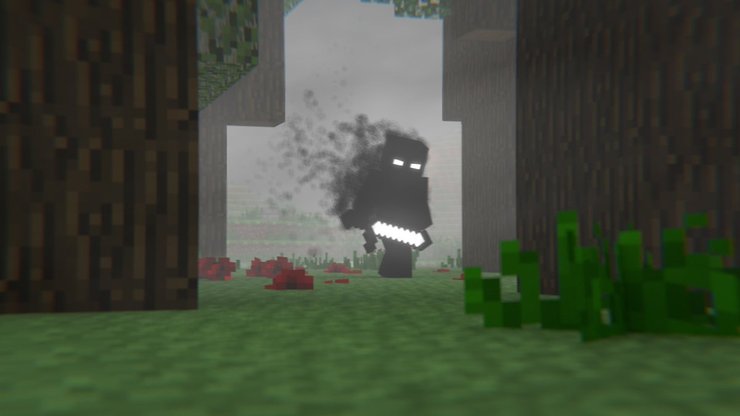 The mysterious Null character in Minecraft.

He then found out random signs in his world that he didn't put on. One of the signs says:

Help! Null is here! Tell everyone about me!

When he turns around, Herobrine was right behind him and started writing in chat:

I need help. Do you remember playing during the Golden Age of Minecraft? Do you remember the man, the one who is as black as night itself? Do not take this monster lightly. I am trapped. You can blame him. I am feared upon being a very evil entity. But, I'm not. That man you've seen before? He is different. He is evil.

The Green Steve Minecraft creepypasta is another story where they found out that they were not alone in their Minecraft world. The author broke a blue block in a desert temple and jump down the hole. He hit a block that sets off the TNT but it didn't explode. Then, a character who looks like Steve but in all green jumped down the hole and hit him. He was teleported to a room made of bedrock filled with creepers. The mysterious character looked like Steve but in all green.

The author was too scared so he quit the game and returned the next day. When he returned he was in a forest and not the creeper room. The chat then appears a message from Green Steve that says:

After a while, he found the house he built and went in. After he entered the house, Green Steve appeared out of nowhere behind him. Green Steve then blew up the players after poping up a message in the chat:

A player named Jack shared his experience with a mysterious character called "1241" on his Single player server. He was looking for obsidian to get to the Nether. When he gets back to his home, his house changed. It was previously made with wood and cobblestone but the wood has turned into netherrack and the cobblestone turned into nether brick blocks. His house was empty and there was only a shulker box with a written book. The author was called ".". He thought his friend pranked him but he was offline.

A few minutes later, a player named 1241 joined the server. While Jack was trying to remove the unwanted guest from his server, his PC crashed. When he entered his server again, he was teleported on top of the nether and he could see a figure staring at him from afar. He then took a screenshot, quit the game, and deleted the server. The player was teleported on top of the Nether.

>>>> Read more: What Is The Best Diamond Height Minecraft After The 1.18 Update?