There are 130 Golden Walnuts hidden across this island. Our ultimate guide on Stardew Valley Golden Walnut will help you find all of them.

The new 1.5 update has brought a brand new location to Stardew Valley. Now, once players complete the Community Center quest, they will unlock Ginger Island. After fixing the boat at the back room of Willy's fish shop, it's time to explore the tropical paradise. There are 130 Golden Walnuts hidden across this island, and your task is to collect them all. Our ultimate guide on Stardew Valley Golden Walnut right here will help you do just that.

What Is Stardew Valley Golden Walnut?

Golden Walnuts are the currency exclusive to the parrots on Ginger Island in Stardew Valley. Players can use these Walnuts to unlock different areas on the island, including the farmhouse, the dig site, and the beach resort. In total, it costs 116 Golden Walnuts to unlock everything. We will also go over the order of which area you should focus on first. It'll cost Golden Walnuts to buy your way around the island.

Additionally, you can also access Mr. Qi’s Walnut Room after collecting 100 Golden Walnuts. It's where serious end-game content lies. There's the Perfection Tracker, a board of special requests, and a vending machine selling exciting items such as a key to all townies' homes.

As we have mentioned, there is 130 Golden Walnuts total on Ginger Island. You can find 93 of them only once, and the remaining 37 can be found through some repetitive methods. Rather than guiding you through each part of the island, we will divide the parts based on the methods of finding the Walnuts.

So, you can find Stardew Valley Golden Walnuts from:

There are a total of 15 buried Golden Walnuts on Ginger Island. You can pry them right off the spots using a hoe, just like when you're digging the artifacts. To find these buried spots, you have to pay extra attention to weirdly shaped locations. They often have a suspicious-looking circle around or, sometimes, a very obvious X mark. 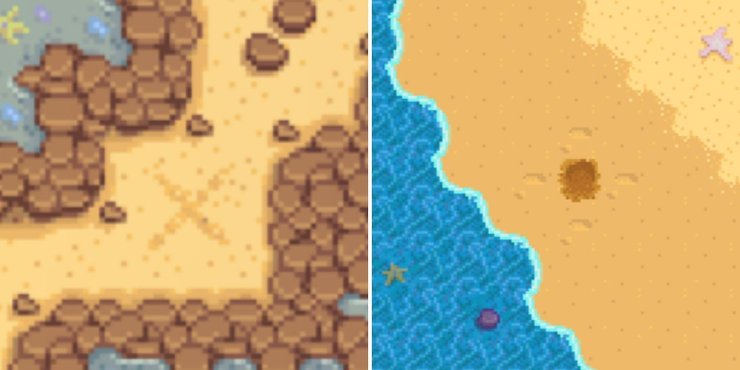 Watch out for these suspicious spots.

These are just like buried Walnuts, but with a little difference. They only appear after you find the journal scrap for them. Journal scraps are a drop from the monsters residing inside the Volcano Dungeon. 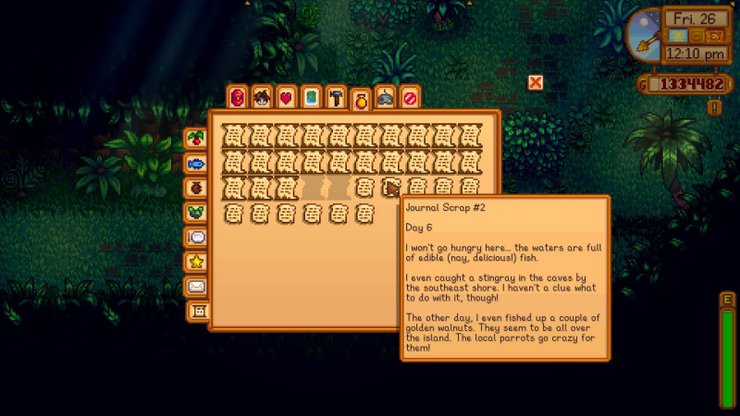 Find Journal Scraps, they may give you some clues.

The journal scraps that will give you the locations of the Stardew Valley Golden Walnuts are #4, #6, and #10. Once you have the journal scraps, head on to the spot and dig the treasures right off the ground.

Next stop, we have walnut trees. Each of them has one Golden Walnut and is scattered across Ginger Island. Some are easier to find, just laying in plain sight, while others are well hidden behind thick bushes off the beaten paths. In total, you will find 22 Golden Walnuts from the trees. 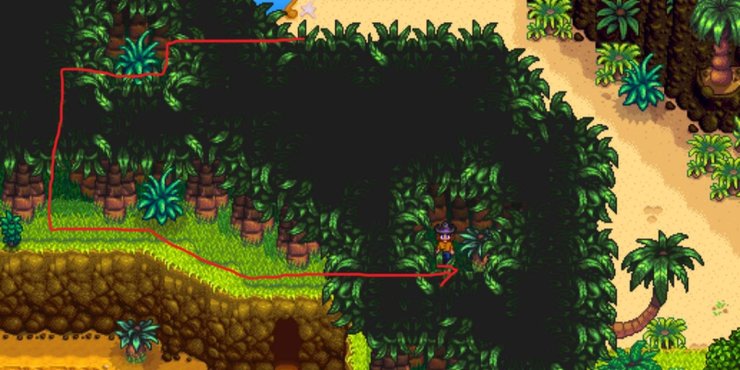 Here's where you can find the Walnut trees:

It won't be Stardew Valley if ConcernedApe doesn't add some new quests and puzzles for us to tackle. Here are what you have to complete to collect all the Golden Walnuts:

On the Southeastern cove of the island, there will be a puzzle when it's raining. To complete this puzzle, you need 5 flute blocks. This item requires a special crafting recipe that can only be unlocked when you reached 6 hearts with Robin.

The answer to the puzzle was actually hinted at in one of the pirate's journal scraps. Basically, you'll see 5 spots on the beach with different numbers of rocks. A small rock is one and the big rock is five. They represent the number of times you have to press each corresponding flute block to imitate a tune that solves the puzzle.

The correct sequence is 2, 11, 9, 5, 7. If you get it right, the flutes will play the Mermaid's song from the Night Market and you'll receive 5 Stardew Valley Golden Walnuts.

This is another puzzle that can only be completed when it rains. Whenever it rains on Ginger Island, there's a Gem Bird appearing somewhere on the island. Your mission is to come up to the bird and scare it away. The bird will leave a certain gem behind. You have to get the correct order to solve the puzzle.

For this puzzle, you will have to find 4 Gem Birds in the East, West, South, and North parts of the island. It will take at least 4 rainy days to complete the collecting. Then, you must place all the four gems on the pillar that represents where you find them. The order in which the gems spawn is random. Finish this puzzle for 5 Golden Walnuts.

Tips: You don't need to wait 4 rainy days to complete this puzzle. The gems dropped by the Gem Birds are topaz, amethyst, ruby, emerald, and aquamarine. The game will randomly pick 4 out of these gems. Your job is to bring all the gems and try the combination until you get it right!

Complete the Simon Says puzzle in the cave north of Tiger Slime Grove to receive 3 Walnuts. This puzzle can be a bit challenging to get right. You have to get all the combinations right, which gets more challenging as you advance further.

To trigger the quest, you have to interact with Stardew Valley Birdie. She's on the Western beach of the island, right across the farmhouse. After the conversation, Birdie will hand you a War Memento and ask you to bring back her husband's keepsake. Follow the steps below to get the item: Lastly, get the locket back into Birdie's hand to get the recipe for Fairy Dust and 5 Golden Walnuts.

After the farmhouse is repaired, you may talk to the Gourmand Frog. Here, the Frog will ask you to grow three crops but won't say which one they are. Instead, you have to solve the puzzle and guess the crops yourself. The correct crops to grow are Melon, Wheat, and Garlic, in that order. 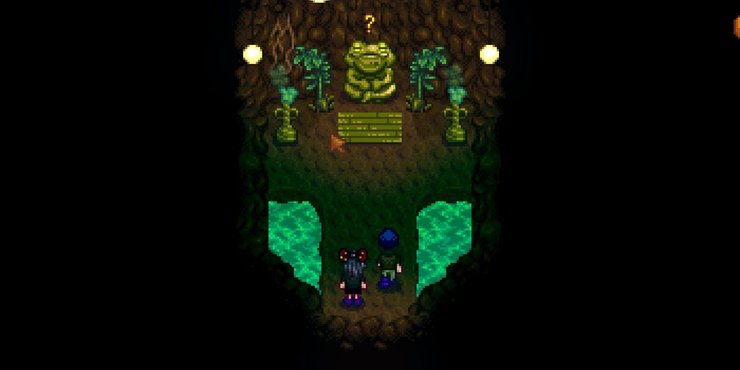 The Frog will give you 15 Golden Walnuts in total.

When a crop is mature, leave it unharvested and talk to the Frog again to show him the crop. The reward is 5 Golden Walnuts per crop, adding up to a total of 15 Walnuts.

Note: All three crops may be planted at any time, together or separately. They must be presented to the Frog one at a time. Only harvest the crop after showing them to the Frog. Also, you only have to grow 1 plant per crop.

After you rescue Professor Snail out of his sticky situation, you unlock access to his field office on Ginger Island. He also asks you to complete his field research for him, including fossil donation and doing some surveys. Fill in Professor Snail's shoes for his project.

For the fossil donation, you have to collect different fossil pieces scattered across the island. Some are found through artifact spots, some through fishing, panning, or mining in the Volcano Dungeon. Each piece of fossil will give you one Stardew Valley Golden Walnut. That's 11 in total.

Regarding the survey, the answers are 22 types of flowers and 18 starfishes. These will give you another 2 Golden Walnuts.

#5 Other Ways Of Getting Golden Walnuts In Stardew Valley

We will go over all remaining methods to get Golden Walnut Stardew Valley: Completing the Volcano Dungeon is a great way to earn resources, including Golden Walnuts.

What To Unlock First With Stardew Valley Golden Walnut?

Golden Walnuts are also the currency on Ginger Island to unlock new areas. You want to unlock places that offer more value first. In our opinion, the order should be: After you unlock all of these 5 locations, you can go freestyle on the rest of the island.

That's everything you need to know about the Stardew Valley Golden Walnut locations. Grab your hoe, head to Willy's boat, and start finding the Walnuts! But be warned, you may not find them all in one sitting, so, remember to slip in some healthy breaks in the middle. Want to read more about gaming, visit our website at GuruGamer.com.

You May Also Like: Ham In Genshin Impact: Where Can You Find It?