Add-ons are part of the reason why Minecraft's replayability is super high. Check this post to find out more about the best add-ons of Bedrock Edition.

ActualGuns 3D is an add-on that brings high-quality, 3D, fully animated guns into Minecraft: Bedrock Edition. It features 9 guns that are all balanced in their own ways and tries to bring realism into place. You need a good device to run this add-on.

Each gun has its own animations for 1st person, 3rd person, aiming, sprinting, shooting, reloading... and more! They can be used in both multiplayer and singleplayer. To obtain the weapons, just trade with the cleric villager. The Ender Dragon is the only of its kind in Minecraft vanilla. This is a huge missed opportunity. This Dragon add-on adds a couple of dragons that you can train as a pet and mount. They are not added smack into the game, however - most dragons are associated with new mobs, mechanics, items, and more.

To acquire a dragon pet, you would usually need to defeat dangerous wizards, dragon hunters, and the like. This makes your Minecraft experience more immersive than ever.

After you tame a dragon, it will be possible to equip a saddle and fly using it. The dragons in this add-on all have special powers - some can spit flames while others can freeze water. Dragon Add-on is one of the best Add-ons for Minecraft Bedrock Edition.

The Mutant Creatures add-on adds 16 new "mutants" into the game, which is a mutated version of a normal mob in Minecraft. This will kick up the game's difficulty a few notches, as each mutant is much stronger than their base form. The Mutant Creeper has 4 legs and moves super fast, all undead mutants have a second stage... and more.

It is best to install this Minecraft mod later on in the game when you have acquired enough gear. The new mobs are created based on Minecraft aesthetics and are completely lore-friendly. Mutant Creatures Add-on amp up the difficulty of your game.

The weirdest part about Minecraft village is that the villagers cannot defend themselves - they need to rely on the player and iron golems. However, this add-on changes that by adding a lore-friendly solution: village guards.

You can change villagers to a swordman or archer now. To hire a swordsman, just give an iron helmet to a villager. To hire an archer, give a bow to a villager. You can then assign them to man the village's defenses. To demote them back to a normal villager, just give them any hoe. 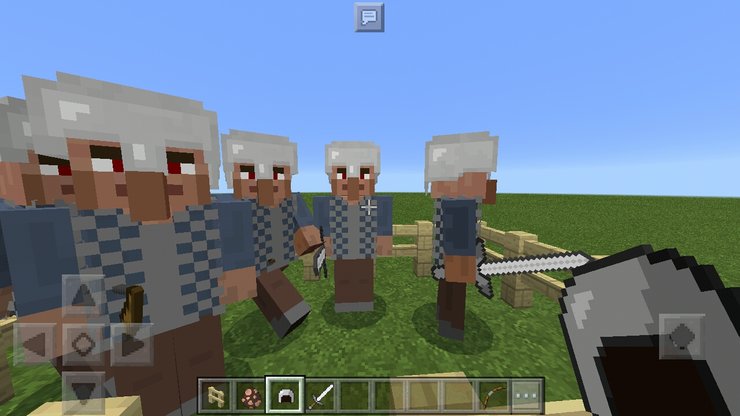 Village Guards is one of the most useful Add-ons for Minecraft Bedrock Edition.

This is a horror add-on that adds the horrific creatures of the SCP universe into Minecraft. Each of these monsters has its own special ability, appearance, and stats. Besides monsters, SCP Foundation also adds new items and NPCs as well.

With over 30 dangerous monsters added into the game, your Minecraft journey would be more dangerous than ever.

SCP Foundation turns your Minecraft into a horror game.

This is the end of our list for the best add-on in Minecraft Bedrock. Interested in more of our articles related to Minecraft? Please check this post to find out more about How To Get Powder Snow In Minecraft & How To Use It.