Tsaritsa Genshin Impact is still a mysterious character who has been mentioned in many cutscenes. Here are things you need to know about her.

Tsaritsa Genshin Impact is still a mysterious character who has been mentioned in many cutscenes but hasn't physically appeared yet. There are many secrets about this character that players will explore when doing quests in this game. Here are things you need to know about the Tsaritsa Genshin character here.

I. Who Is Tsaritsa?

Tsaritsa is known as the current Cryo Archon Genshin Impact but she inherited this position from the previous Cyro Archon. She is the leader of FATUI - one of the main villain forces in Teyvat from Snezhnaya. Tsaritsa is also the Queen of Snezhnaya - the Cyro nation in Genshin Impact. Besides, this mysterious character is a member of the Archon Affiliation in Teyvat. She is one of The Seven Archons who rules seven nations in Teyvat.

In addition, Tsaritsa has many loyal followers. It's unclear that other FATUI Harbingers' loyalty is of genuine faith or fear, Childe's dedication is real. He described that his master has a gentle soul. About other followers, Dainsleif described that Tsaritsa had no love left for them, and neither did them. Those followers just wanted to stand by her side and work for her until her rebellion against the divine in Celestia comes at last.

Her true follower, Childe, talked about her that she used to have love and a gentle soul. But she was forced to be harder and fight for people in her nation. But the FATUI force working under her will is implementing questionable acts and causing chaos all over Teyvat. 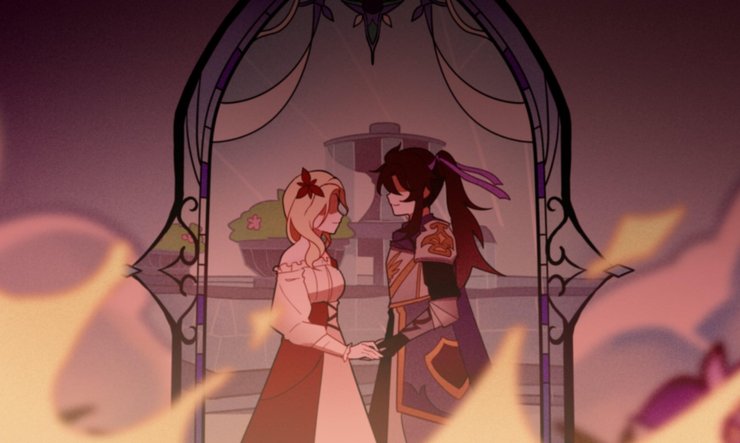 She is not really a villain as she lost her love for her people.

The element of Tsaritsa Genshin Impact is probably Cryo. But her weapons and attack patterns are still unknown. We haven't had any information about her true role in this game. Besides, her release date is still unknown. All her lore is only revealed in the dialogues of other characters, such as Dainsleif and Tartaglia. Tartaglia said Tsaritsa had a gentle soul although she looked cool.

Learn more about Genshin Impact Tsaritsa by answering these questions.

#1. Is Tsaritsa stronger than Zhongli?

Both Tsaritsa and Zhongli are Archons in Teyvat. But Zhongli is the original Archon from the Archon War while Tsaritsa inherited this position from the previous Cryo Archon. Tsaritsa is not as powerful as Zhongli because Morax is the strongest Archon in the Genshin Impact world.

Zhongli is the strongest archon in Genshin Impact now.

#2. Will the Tsaritsa be playable?

She is a non-playing character now. It's still unknown whether Tsaritsa will be a playable character or not because Snezhnaya hasn't been unlocked. The Cryo nation will come to the game in later updates.

To check the correct pronunciation for the name of the current Cryo archon Tsaritsa, you need to listen to Childe's dialogue about her.

A lot of players are curious about Snezhnaya. Many Genshin Impact nations haven't been released, include this nation.

Snezhnaya is the Cryo nation that is still unlocked. The exact location of this nation on Teyvat is still unknown. It has many subareas, including Zapolyarny Palace and Morepesok. It seems to be inspired by Russia in the winter because its name means "snowy" in Russian. It's believed to come to this game in 2025. Tsaritsa Genshin Impact may also come as a playable character that day. Snezhnaya is the Cryo nation that is still unlocked now.

Besides, there are some characters from Snezhnaya Genshin Impact who have appeared in this game already.

There are many other NPCs from the Cryo nation who has appeared quickly in some cutscenes but they haven't shown much connection to the story of the game. Other playable characters from this nation will also come to the game in later updates. Three Fatui Harbingers from Snezhnaya have appeared in the game, including Childe, Tartaglia, and Scaramouche.

Those are things you need to know about Tsaritsa Genshin Impact and her nation. Just stay updated to get the latest news about her and other characters in later updates.